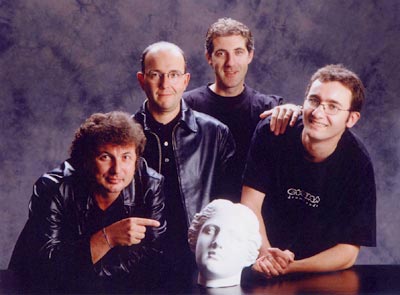 PROGRESSIVE: A PARALLEL, NOT SUBTERRANEAN, MUSICAL WORLD.
END OF THE SEVENTIESï¿½

The musical panorama at the end of the seventies in Italy was very rich: the strong signal launched from the historic groups of ï¿½Progressive Rockï¿½ like PINK FLOYD, GENESIS, YES, KING CRIMSON, V.D.G.G. and, from Italy, LE ORME, PFM, BANCO e NEW TROLLS still lives on. In Turin there are groups like ARTI+MESTIERI, HORUS, GNOMI & ZAUBER and until 1981, there were many other groups influenced by ï¿½Progressive Rockï¿½.

They were boys aged between 14 and 17 years old, but with bright ideas.
In fact, since the first moments, this group had a typical ï¿½Floydï¿½ sound and like many other beginners they had a limited capability with their instruments. 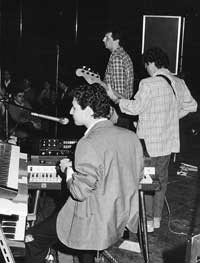 Since the 1981 the times were changing; the sounds of ï¿½New Waveï¿½ and ï¿½Punkï¿½ coming from the anglosaxon world is also here in Turin. New groups and ideas are born but AQUAEL continue on their own way.
In 1983 the group appeared in a review in the magazine ï¿½Frigidaireï¿½ as ï¿½a typical Rock bandï¿½. And the birth of new English groups like MARILLION, IQ, TWELFTH NIGHT and PENDRAGON brought a breathe of fresh air into the ï¿½progressiveï¿½ world.
Anyway , big pressures and more difficulties surrounding the group forced to a change.
During 1985 a new singer arrived; Marco Dï¿½Angeli and a new drummer; Alberto Bordone, with new ideas in agreement with the 80ï¿½s pop music and the birth of modern songs..

However ,the old ï¿½progressiveï¿½ stuff remains, and two concerts at ï¿½Centralinoï¿½ and ï¿½Metrï¿½ (music temples in Turin during the 80ï¿½s) were well appreciated by the public.
From 1986 to 1989 the group changes itï¿½s name to LEGO, in an attempt to turn away from the past, but it was only an illusion; after discussions over the future strategy the group disbanded for two years.
The new singer and the new drummer left the band and the three original members during the spring of 1990, re-started with new sessions.. 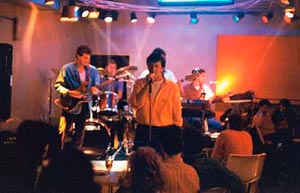 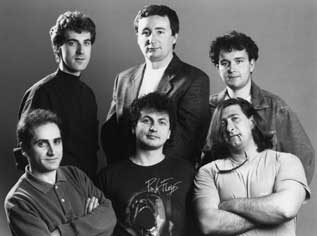 The three original members return using the name ï¿½AQUAELï¿½ and start with new ideas. Many things changed: each member of the group has a different life, more of them had families and different jobs. The band becomes a group of friends united by the love of music, rather than a group searching success. With arrogance, the group sweeps away all the restrictions of the previous decade; track lengths of over 10 minutes returned; Sergio Cagliero, old friend and great arranger enters the line-up on keyboards; Aurelio Marsiglia coming in on saxophone and a new strong (heavy) drummer like Pasquale Di Monte.
Turin and the Italian musical panorama is very changed even though there areï¿½progressiveï¿½ groups like FANCYFLUID, ATONï¿½S, ARCANSIEL, EAZYCON, EZRA WINSTON, NUOVA ERA, HOP FROG and the never surrendered ZAUBER.The new music of the group contains new flavours from Funky and Rhythm & Blues and after many changes between 1992 and 1994 and big concerts like the evening at ï¿½Garageï¿½ in Ivrea and atï¿½Hiroshima Mon Amourï¿½ in Turin, new discussions stopped the band. After 15 years of music together, still thereï¿½s not an album recorded and within the band there are very few members recognizing this truth.

MAURY E I PROMEMORIA
During march 1995, Maurizio Galia, keyboard player, vocalist and songwriter meets Andrea Marasea, last drummer of AQUAEL and his friend Roberto Regolizzo, bass player and co-former of ï¿½PROMEMORIAï¿½, they start the recording of an album. They chose a selection of songs from AQUAEL, songs from ï¿½LEGOï¿½ era and new interesting stuff. After 18 years from the first session in a garage, ï¿½ZIQQURAT NEL CANAVESEï¿½ was released.
A very good album, with special guests like Dino Pelissero on flute, Bruno Giordana on sax and Silvia Delfino on backing vocals.This album is appreciated by the main music magazines (A fantastic review is published by CIAO 2001!) as a good presentation for new projects.
Anyway, this album realized few sales, rejected by many peoples that didnï¿½t find a homogeneous ï¿½Progressiveï¿½ style. 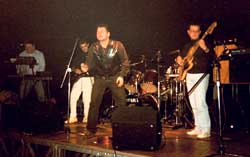 At the end of the "ZIQQURAT NEL CANAVESE" recordings, Maurizio Galia recognized that the completion of his work needed the help of his old friends; for example, in this album Nicola Guerriero plays lead guitar, Sergio Cagliero plays Hammond organ, Enrico Testera appears as co-arranger and the first drummer Aldo Leone appears as a guest. After reviews in magazines and presences in various websites they threw away forever the name AQUAEL and became MAURY E I PRONOMI, respecting the separation from the band by Marasea e Regolizzo: the owners of the name PROMEMORIA. The other fact is that the band is the project of Maurizio Galia, the only member registered as a songwriter by SIAE.
During the spring of 1999 Maurizio Galia, Nicola, Enrico and Pasquale Di Monte on drums began new recordings. The result was three new tracks for a compilation prepared for the twentieth anniversary. This compilation contains another 9 tracks recorded during the group's history.

TANGANICA, IL PASSATO E IL FUTURO, was distributed to the press in only 150 copies and was a sell out through the websites of Vitaminic and Peoplesound. The work was appreciated one more time and the group got an airplay list in California through Progradio.com, titled "the Maury Show".

(EC)CITAZIONI NEOCLASSICHE
In the autumn of 2000 the group enlisted a new drummer, young and strong: Sergio Ponti, a pupil of Furio Chirico, one of the best drummer in the world with a great past in the "progressive Rock" history. In fact the group began a collaboration with Raoul Caprio of Kaliphonia Records as supervisor of the new songs for the new album, although Maurizio signed a contract with Mauro Moroni. "(Ec)citazioni Neoclassiche" is published by Mellow Records, finally with a great "progressive" sound. The new record begins with "Il Racconto degli Dei", a long song divided in seven parts.
Return to the seventies? Opportunism? Nothing of this! This album gets ideas and stuff from the past, but the constant search for new sounds and direct communication with the public is the proof of the talent of Maurizio Galia, a new reality in the universe of Italian Authors and Musicians. Special guests like Dino Pelissero again on flute, Bruno Giordana again on sax, Marco Giacone on lead guitar and Sergio Cagliero again on keyboards, makes a great sound and pushes this album to a high and mature result.And last but not least, the presence on percussion of a group from Senegal, directed by Michael Seck, is the proof of a group launched across the year 2000 but looking back to 1979.